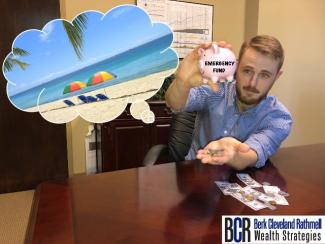 Bad Savings Habits and How to Fix Them

Everybody knows that good savings habits are an integral part of a sound, healthy financial plan.  However, some people who think they are good at saving because they save consistently aren’t actually as good at it as they think.  There’s a lot more to being a good saver than just regularity.

Here are some of the most common savings habits that, if not avoided, can result in saving less than you might otherwise.

1- Paying yourself with leftovers.

Many people pay their bills and spend what they want/need to throughout the month; then at the end of the month, they move whatever’s left in their checking account to their savings account and say, “Well, at least I’m saving some.”  While saving some is better than saving nothing, unless you have a champagne kind of income and a water kind of lifestyle, you’ll never save enough for a secure future that way.  You need compound interest on your side if you’re really going to put your money to work for you.  Smart savers pay themselves first and spend the leftovers.

2- Reaching into your savings regularly.

It’s easy and tempting to take a few dollars from your savings to cover pesky little unexpected expenses that pop up, like car repairs.  The problem is that these kinds of things happen more often than you think they do.  Once you dip into your savings to pay for one expense, it’s easy to justify doing it again and again.  Before you know it, you’re using your savings or brokerage account like just another checking account.  You need a full emergency fund to cover the unexpected, which leads to the next bad habit…

A lot of people have an emergency fund that is never fully funded.  This bad savings habit is caused by a budgeting problem.  These folks only budget for regular, recurring monthly expenses, but forget about semi-annual or annual expenses, like car insurance or taxes.  When these bills come due, they reach into the emergency fund to pay them; then they’re short if their car breaks down soon after, so they dip into other savings.  Expect the unexpected, and make it a line-item in your budget so you can maintain a true emergency fund that meets your needs.

4- Putting away more than you can afford.

Sometimes people who pay themselves first pay themselves a little bit too much, then find themselves short later in the month after all their bills have come in.   To keep from having to touch their savings, they pay a bill or two on a credit card, and then debt starts building up.  At that point, the interest you're paying on the credit card means you're "saving" less than you would have if you had just budgeted bills properly and put less in savings to begin with.

5- Saving too much in inappropriate vehicles.  Sometimes people have a difficult time differentiating between “saving” and “investing.”  We have met with people who had saved $500 a month since they first began their career, and wound up with over $200,000 in a checking or savings account.  Saving that much is great, but keeping that much in a regular bank account is not generally the best option.  It’s better to keep enough for a good emergency fund and save/invest the rest in something more long-term for your future.

How are you doing with saving?  Take the BCR®Financial Check-Up® and find out today!