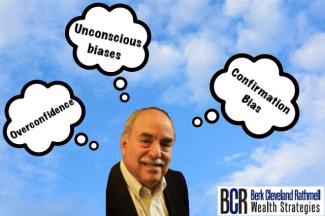 Economics entered its modern sense in the nineteenth century, but economic thought certainly started long before that.  However, economists almost always started from the assumption that people would do what was in their own best interest.  In the last 20 or 30 years, some economists started to question this assumption.  From this was born the subject of behavioral economics, also known as behavioral finance. Behavioral economists defined several types of fallacies people carry with them when investing and they all lead to adverse economic behavior on their part, and thus poorer investment results than they otherwise deserve.  Some of these are discussed in this blog and will be continued in Part II.

Generally, these fallacies, or biases, occur because we tend to be emotional creatures.  Emotions are not good drivers of investment strategy.  You’ll notice that there is overlap amongst these, so don’t be surprised if you sense that.

Overconfidence drives us to feel that we’re smarter than we really are and that we have more information than we actually do.

I know a fellow who assured me in 2015 that the European banks had not learned the lessons of the 2008 bank crisis, and this was certainly going to lead to another crash.  He invested heavily on the assumption that this kind of failure was imminent.  We all know that this second crash hasn’t happened – yet.  He was overconfident and thought he knew something that was true, and his overconfidence caused him to make a poor investment decision.

If I believe the market will go up, I tend to feel better learning why my belief is correct, and ignore or disbelieve information that disagrees with that belief.

Unconscious biases are those that hide from us, making them difficult to come to grips with.  Are there certain investments that you avoid offhand or don’t even consider?  This may be because of unconscious bias.  Consider that many people invest only in US companies, or won’t consider emerging market companies.  Statistically, they may be losing out on investment opportunities because they haven’t even considered them.

Over-optimism or over-pessimism drives us to make investments, or avoid investments often based on limited information.  I’m sure that X will occur – I’m really sure –  I’m positive it will happen!  In 2008 and 2009 there were stories of people who mortgaged their homes and took the money designated for their children’s college education because they were sure, in 2006 and 2007, the market would keep going up.  But the fact is that it might not happen, or at least might not happen in the way you imagine, and for those people, it didn’t happen the way they were so optimistic it would.

The disposition effect drives people to sell their winning positions too soon and hold onto their losing positions too long.  This was discovered after analysis of trading that was done by investors at several stock brokers.

What drives people to make these trading decisions?  I know of one fellow who owned about $1 million of stock in a major company.  The price of this company fell significantly and he’s waiting for it to “get back”.  Why does he think it will ever get back to the price it once had?