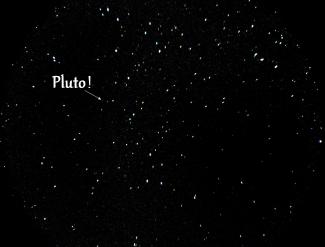 Only a nerd like me would try to compare last week’s New Horizons space probe’s flyby of Pluto with saving for retirement and long-term financial goals.

For those of you who don’t know, the New Horizons probe was launched in January of 2006.  The purpose of the mission was to study Pluto (the only planet that had not been explored), its moons, and the Kuiper belt (I have no idea what this is.).  Nine and a half years and 3,000,000,000 (Yes, three billion) miles later, the satellite came within about 7,000 miles of the dwarf planet of Pluto.  On Tuesday, July 14th, after traveling the three billion miles, the craft arrived at its target zone about 72 seconds early, which seems more accurate than most commercial flights I have flown on that have traveled 2,999,999,644 miles less.  The precision of this mission was mind-bogglingly impressive.

According to NASA, the cost of the New Horizons mission was roughly $700 million - a large investment and a major undertaking of time and manpower.

My analogy may not be sinking in yet, but let’s break down the basics:

To reach and plan through your retirement, start with your basic goals towards this dream.  Have a passion to reach these goals.  This dream will take effort and discipline on your part.  If you don’t plan now, the mathematical likelihood of great success will be small.  Spend time reviewing your budget and allow for comfortable contributions into your retirement account(s).  The percentage you choose to defer can be increased or decreased based on life changes, but it is important to strategically increase the contributions you make over time to stay on course.  As NASA did with their partners, consult with trustworthy individuals that specialize in certain areas. Get a second opinion as well.

Like the New Horizons probe, the risks and rewards were considered all along the way.  Space has magnificent obstacles that must be thought through carefully - cosmic rays, electromagnetic radiation, and magnetic fields.  Once the satellite was put into space, the trajectory was monitored and adjusted, similar to the periodic review and analysis of an investment portfolio.  Unexpected life events come up from time to time.  It is important to be prepared for these changes and to make the necessary modifications to remain successful in your specific mission.  Remember, when you reach your retirement date, the next phase of this journey should have been planned so you do not run out of money in your lifetime.  Saving for your retirement can take 30+ years, but it is also going to potentially fund your next 30+ years.

This mission, like your retirement, could not have been successful without a vision, careful planning, and consistent monitoring.  My thoughts are that humans are capable of doing incredible things like the New Horizons mission to Pluto, so do something incredible with your retirement!  Think big, think Pluto big.

Information from this article was found on the following websites:
• Wikipedia.com
• Space.com
• Theguardian.com
• News.Discovery.com