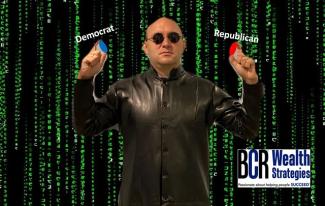 How the Election of a President Affects Markets

BCR Wealth as a company does not have a political position. Of course, our employees as individuals each have their own opinions and vote as they choose. We work hard not to position our blog for one party or candidate. This blog is intended to follow that practice while answering the concerns that we are hearing and anticipate growing as the November election grows closer.

In summary, there will be increased marketing by candidates and commentary by pundits that the presidential choice before us will substantially impact the markets and economy for the proceeding 4 years. We hear concerns that the polls suggesting former Vice President Joe Biden will likely be elected and bring Democrat changes to the regulatory environment will be disastrous for investments. Should you change your investments and/or strategy? Historic data does not support this extrapolation. Yes, the direction a president takes our country has an indirect impact on the economy and thus the markets but not to the extent that people are led to believe. If your investment philosophy and portfolio investing is properly diversified, monitored for rebalancing and positioned based on your needs and ability, making a change, or trying to time the market is likely to do more harm than good.

Let’s start with the annualized S&P return for the last 14 presidents as published by Forbes. If the president’s party’s regulatory environment had the impact on performance that we are told you would expect that parties’ presidents to be on top and the other parties to be on the bottom. 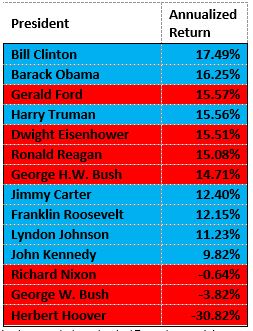 (Yes, I removed where they had Trump because it is not accurate as to where he sits today, and we will not know how he compares until his presidency is over. I estimate as I write this that the S&P has annualized somewhere between 10-12% during his presidency)

What about the damage that was done during presidencies? Is there a clear delineation in downturns by presidential terms? Let’s look at the worst market drawdowns in the last 22 presidential terms they were elected to serve as published by Bloomberg. 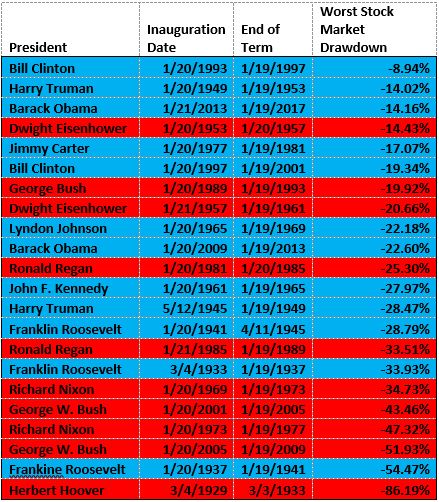 (I took Bloomberg’s’ data and sorted by Least to Worst Drawdown. Again, Trump is not included because his term is not complete, but I estimate the S&P Drawdown earlier this year to be 35.4% and like everyone else hope/expect that to be it until the next term.)

Again, I do not see a party winning. There are market downturns in every presidential term, and I do not expect the choice of president in this next election to change that.

To me the most important thing to look at is your alternatives. If neither party has a monopoly on wealth creation but instead global ingenuity, growth, and the hard work of individuals in fact grow production and thus the value and performance of stock ownership, then timing the market is a fool’s errand. The chart below provided by Dimensional Fund Advisors shows the growth of $1 and demonstrates that markets have rewarded long-term investors under both parties.

One final thought, while timing the market has been proven futile, in theory you could get it right if you knew something that the had not been factored into the market yet. By the time you see a poll and believe that it will impact the market prices have already adjusted and a change in your investments are transacted with its impact built in. Focus on your long-term goals and how you will meet them and do your best not to be sucked into the fear that will be spread by both parties during the coming months.