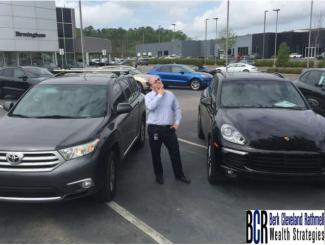 People view car-buying in different ways.  My experience is that people's attitudes toward car-buying are based on how they were raised and their experience with cars, and they find justification to back their decisions.

Many people who only buy new vehicles see them as a status symbol, don't want to deal with car problems or may be concerned that the cost of maintaining a used car will exceed the money saved on the purchase price.  Others value the technology – especially the safety features – available on the latest models.

Most people who prefer to buy used cars feel the rapid depreciation of new cars is not worth it for a vehicle they view as a utility to get them from point A to point B.

What I want to do is explain what happens on both sides to help you understand the decision you're making when you choose a car.

According to the most recent data from Nationwide, the average age of all vehicles on the road at the end of 2014 was 11.4 years.  Obviously, they aren’t equally distributed in age, but if they were, that would mean that for every car being driven off the lot today, there would be a car well over 20 years old on the road.  This is a result of two things: the increased longevity and improved quality of vehicles produced today and the decrease in new car purchases during the recession.  I, myself, have a vehicle that's almost 15 years old that doesn’t have high mileage, so I understand how this is happening.

A report from edmunds.com on how fast a car loses value notes two important things.  First, on average, a new car loses 11% of its value the moment it leaves the lot.  Second, during the first five years, vehicles depreciate between 15% and 25% each year.  That means that on average, a car is worth 37% of what you paid for it five years after you bought it.

So here’s an illustration to show what that means in theory.  If a car is driven 15 years and the original owner drives it for five years, they paid almost 2/3 of the purchase price for 1/3 of its use.  The second owner then pays around 1/3 of the purchase price to drive the car 2/3 of the time it's on the road.  In essence, the original owner is paying four times more than the second owner.

There's an argument that it costs more to maintain a car between years 6 and 15 than between 1 and 5. While that is true, the math doesn’t make up for it.  If you have paid only 1/3 of the original purchase price, even if more than one of the most expensive repairs occurs, you will still pay less over the life of the car than you would if you had bought it new.

The true cost of owning a car

To illustrate this, you can use one of my favorite tools.  The True Cost to Own® calculator on edmunds.com allows you to compare vehicles and calculate the cost to own them.  For example, you can compare a 2017 model against a 2007 and see the five-year expenses associated with both vehicles.

The financial math shouldn’t make your decisions for you.  Knowing the math makes you an informed buyer.  If you know the math and still prefer to buy a new car for the features, the status, or some other reason, that’s OK.  If you haven’t guessed by now, I like to purchase lightly used vehicles for myself.