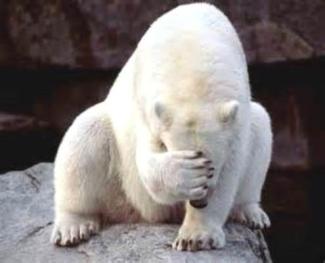 The following thoughts were inspired by Nick Murray in his book, “Behavioral Investment Counseling”.  These thoughts ring so true to me.  The hard part, though, is to truly internalize them.

The subject is bear markets.  These are markets that move down by a designated percentage over a designated period of time.  To most people the notion of bear market induces pictures of stock brokers jumping out of windows, though I don’t think that has happened in 80 years, if it ever did. Bear in mind (no pun intended) that the percentage and time period are each arbitrary, and not particularly relevant to this blog.

However, what is definitely true is that bear markets can and do cause stress in most investors, and test our perseverance.  However, should they cause stress?  Let’s look at the record:

First, realize that bear markets are transient – always have been.  They are not a cause for stress for the long term investor.  Consider this:  Since the end of World War II there have been 13 bear markets, using the S&P as the market gauge, each with a market drop of about 20% or more.  It’s been about 70 years since the first of these in 1946 (measuring from the peak before the fall), so they occur, on average, about every 5.4 years.  That means they’re pretty common.

I myself have lived through all but the first, although I was being gestated at the time.  Note that the world is still here; In fact, we all are.  More importantly, when the first of these debacles first occurred, the S&P 500 stood at the level of 19.3.  As I write this, the S&P level is 2118 (April 24, 2015).  This is a gain just short of 110 times the previous level.  If you annualize this it comes out to about a 7% annualized return.  Note, these S&P levels exclude dividends, so if you had invested through all these “end of the world” events, you’d have received better than a 7% annualized return.

How long do these events last?  On average, they have lasted about 14.7 months (for the statistically minded, the standard deviation was 10.3 months).  The longest was 36.5 months; the shortest was 1.5 months.

We see that bear markets are common, can last a long while or a short while, and cause a significant drop in value.  However, they do go away, and are followed by an increase in the market that brings back the previous value and more.

The most important thing about bear markets is how we react to them.  From this post, it is clear that a “woe is me” is unnecessary.  Rather, try to think of them as “the market is on sale”.  That’s the time to invest more because you don’t know how long the sale will last.