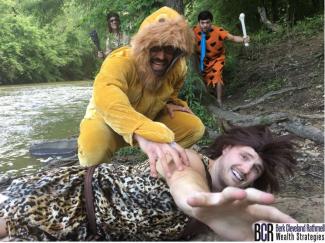 Most people we talk to have been mentally affected by the fairly recent (in financial terms) 2000 Dot-Com crash and the 2008 recession.  At this time in history, people are more fearful than ever about being in the market when it is going down.  When we look at our clients, we are more scared of them not being in when the market is going up because we weren't put here on earth to be investors.  We are here to be survivors, and survival instinct goes against investing common sense.

Part 1 – The Caveman and the Saber-Toothed Tiger:  How Survival Instinct Works Against You in Investing

Think back to the time of the cave man, when people got up in the morning and left their cave to forage and hunt.  Imagine that a cave man named Fred wakes up one morning, looks out from his cave, and sees Barney, his next-cave neighbor who went out to hunt earlier, being mauled by a saber-toothed tiger.  Survival instinct kicks in, and Fred runs back in his cave and hides, then turns to look out and sees the rest of the neighborhood also running for their caves.

Bailing out of the jungle makes sense in the hunter-gatherer world, but in investing, it locks in your losses.  When you see everybody running, this can be a better time to get into the markets than to get out.

When Fred looks out of his cave the next morning, things are bright, sunny, and calm.  Fred realizes the saber-toothed tiger ate yesterday, so he isn't hungry right now and has gone away.  For a cave man, it is comforting to see all his neighbors back out and feels safer within the masses.

Just as mass hysteria can cause bad decisions the publics comfort in the market can precipitate bad decision making.  When the times are good our instincts can kick in and start us questioning why we don’t have more risk on the table.  If we see others reaping more benefits over the recent time period we think we should be there to receive those benefits tomorrow.

It is hard to fight instinct.  The key is having someone that isn’t emotional about your money with either managing it or weighing in before you take action.