Most people we talk to have been mentally affected by the fairly recent (in financial terms) 2000 Dot-Com crash and the 2008 recession.  At this time in history, people are more fearful than ever about being in the market when it is going down.  When we look at our clients, we are more scared of them not being in when the market is going up because we weren't put here on earth to be investors.  We are here to be survivors, and survival instinct goes against investing common sense.

Part 3 – The Market’s Response to Crisis

When the average investor is advised to stay in the market after a crisis, the immediate response is typically, "But why would I stay in when it's continuing to fall?"

Our response to this question is, "Sure, it looks like the decline could continue, but can you tell me when would be the right time to get back in?"

The mistake most people who bail out of the market make is that they don't get back in until after the good days have happened, so they miss out on the best returns.

Have a look at this chart which tracks six significant market crises going back to 1987: 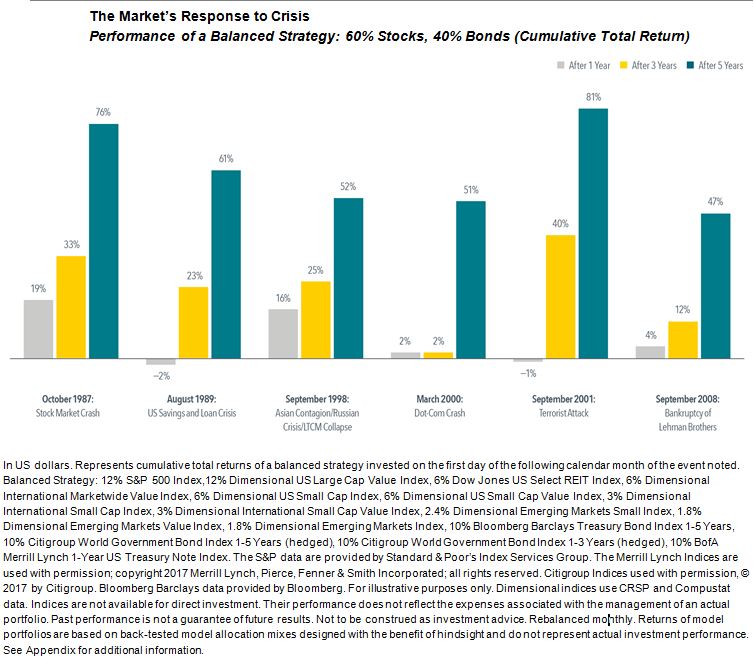 Notice that the 60/40 portfolio described in this chart experienced a significant comeback during all six of these crises.  For instance, if you had bailed out of the market after 9/11 and not known when to get back in, you would have missed out on some significant returns; however, if you had stayed in, you would have seen a cumulative total return of 12% after only three years and 85% after five years.

If you have gotten out of the market because of a downturn, our advice is to get back in as soon as possible and don't panic when you see everyone else running for their caves.  You can't know when the "right" time to get back in the market is, and as we have demonstrated, waiting until you see it recovering can mean losing out on some dramatically increased returns.  The thing to be scared of is not losing money in a crisis, it’s missing out on the recovery that follows.