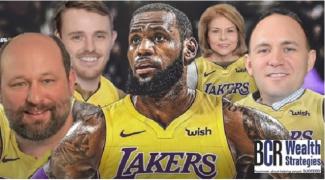 What Return Should I Expect from My Portfolio?

Now, that’s an excellent question! What return should you expect from your portfolio? I could give you a song and dance about predictions and fluctuations. But instead, I’ll take you to a Lakers game.

I’ve got 2 tickets to the Lakers game, and LeBron James is playing. But before we go, you ask “What score should I expect from LeBron?” So, to answer that, let’s look at his game stats.

In his entire 1206 game history, LeBron James has NEVER had an “average” game. Yeah, never. So, although these numbers give us the picture that he is a “good performer,” we still have no idea what to expect.

Now let’s look at the S&P 500 to answer that question about your portfolio.

Guess how often the actual growth has been 10%?

So, to answer your question about what you should expect from your portfolio, I want to offer some simple advice.

Treat your portfolio like the Lakers game. Find a good player and then let them play their game.