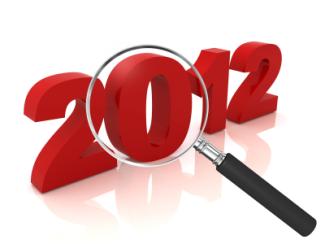 A Year of Anxiety (and Excellent Returns)

Many of you reading this will be surprised to discover that 2012 was a great year to be an investor.  Amid the unhappy headlines, anxiety over America's finances, a highly-partisan presidential election, worries about the Eurozone and the potential for recession, stocks quietly rewarded patient investors with double-digit gains.  It is helpful to remember that the year began with dire predictions and a lot of uncertainty about the prospects for the U.S. and global economies.  The housing market was weak, unemployment was high, the Euro economies were in recession (or, in the case of Greece, bankrupt), and it was not hard to find predictions of a catastrophic year.  Investors who ignored the gloom and doom were rewarded with returns approximately twice as high as the historical averages.

A review of various asset classes:

The dark clouds were relatively small.  Commodities barely eked out positive returns, led by agriculture (up 6.46%) and precious metals (up 6.21%).  Energy stocks were down 1.37%.  These commodity investments are in the realm of alternative investments, an area that we have not embraced.  After careful analysis, we deemed these investments too risky for our client portfolios.  However, we do have exposure to commodities through the holdings of our mutual fund companies.

Investors who believed the negative headlines and pulled their money out of equities into so-called safer havens suffered accordingly.  The current yield on most investment grade bonds is less than 2%.  However, on a total return basis there have been nice gains in some of our bond funds due to increases in the value of the bonds.  As a long term investment, however, bonds are not providing yield.  Together with a balanced investment strategy, investors can earn the annual cash flow they need to maintain their life styles.

Of course, we must impose our caveat.  This is a review of 2012, not a forecast or guarantee of future outcomes.

Meanwhile, we narrowly avoided falling off the "fiscal cliff."  As you probably know by now, Congress has passed a measure that avoids a return to the tax rates of 2001 and delays the imposition of massive spending reductions across the federal government.

There will be many detailed articles and discussions about the new legislation.  Below is a brief summary of what Congress has wrought.  It may be best to take these new laws into the context of what would have happened had they not passed.

Briefly, our tax rates would have reverted to the rates in effect in 2001.significantly higher than they have been more recently.  Additionally, there would have been massive reductions in government spending which, according to many economists, would have caused new unemployment and a possible recession.  I do not believe anyone is forecasting recession now.

For those earning less than the threshold, there is no increase in federal income tax rates.  For those incomes above this amount, the rate increases to 39.6%, up from 35%.  Taxpayers above the threshold will also bear increased rates on dividends and capital gains rising to 20% from the current 15%.  Those earning below this  threshold will continue to pay taxes at the current rate of 15% on dividends and capital gains.

The bill would also maintain the current $5 million estate tax exemption ($10 million for couples), but would raise the tax rate for money transferred to heirs above that amount, from 35% to 40%.

The law reimposed a Personal Exemption Phaseout (PEP).  This is an exception to the new threshold rule in that for those earning over $300,000 the amount that of personal exemptions will be limited.  The calculation is much too complicated for this discussion (or any other for that matter)

The limit for itemized medical expenses increases to 10% from 7.5%.  This means that to have potentially deductible medical expenses, they must exceed 10% of your income.  So that we can get the full benefit of understanding the complexities of the Internal Revenue Code, Congress added the following:

Individuals will now be permitted to convert their 401k account to a Roth 401k account regardless of whether they are allowed to take distributions from the plan.  The conversion will be taxed as any other Roth conversion.  The only requirement is that the plan provides for designated Roth accounts.

This is considered a revenue raising transaction as current taxation will apply rather than taxation to be incurred at traditional withdrawal events.

What Did Not Pass

Therefore, we will again be facing another media and political circus,  at least on these items, shortly.

Today, the markets responded well to the new legislation, the Dow Jones Industrial Average went up 308 points or 2.36% and the S & P 500 went up 92.75 points or 3.07%.  Virtually all international stock market indices went up yesterday as well.

None of this, of course, is guaranteed, and it would be nice if our government policymakers would finally settle on a plan to reduce the federal debt without wrecking the economy in the process.  But those who ignored the optimistic outlook for 2012, and looked at the headlines instead of the millions of workers who got up every day and went to work to build (or rebuild) the economy, probably regret it today.