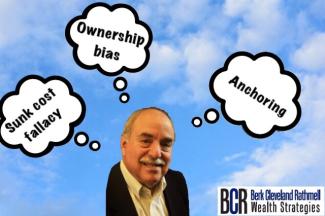 There are certain fallacies identified by behavioral economists that impact how we make decisions as investors, and being the emotional creatures that we are, we tend to be heavily influenced by these. Here are some biases found in behavioral finance.  If you missed Part I of this two-part series, it can be found here.

Home bias drives people to only invest in their home area, be it their own country or state.  There’s a notion of trust or understanding that gives comfort to investing close to home.  Does this seem to be a good way to diversify your investments?

The sunk cost fallacy drives many decisions, even outside of the investment arena.  Essentially, this is a person’s failure to realize that past (sunk) costs cannot be retrieved and only the future should be considered in decision making.

Suppose you buy theater tickets for $50 each.  When you arrive at the theater, you realize the tickets were left at home, and there’s not enough time to go home, get the tickets and still see the show.  New tickets will cost another $50 each. Don’t let your decision at that time be driven by the money spent on the tickets at home.  They are irrelevant.  That money is gone.  The only concept that should be driving your decision is if you want to pay $50 per ticket now.  But how many times have we said something like “I already have money in this” to ourselves?

Status quo bias prevents people from moving forward.  I’m going to keep the investments I have and ignore any outside opportunities.  What I currently have is the best set of things in which I could invest.

Probability unawareness causes people to have poor judgment on the probability of outcomes.  This manifests itself as assigning higher probabilities than reality actually measures for rare events, and lower probabilities than reality measures for frequent events.  As a result of this people invest in high-risk situations/investments and avoid low-risk situations/investments.

Myopathy blinds us to the long-term and drives us to think short term.  About ten years ago “everyone knew” that interest rates were about to go up.  They had been low for so long it was inconceivable that they could stay low, let alone go lower. Here we are in 2018, and the interest rates are not only lower now than then, but they’ve just started moving up in the past year.  I know people who sold all their investments in 2008, and are still waiting for the market to “settle down” before they “get back in.”  They fixate on the short term, and to date missed out on an opportunity to grow their investment value.

Anchoring is easy to fall prey to. It occurs when someone is exposed to a number, sometimes unconsciously, and uses this as a basis for another context.  One way this affects us is holding an investment until it gets back to a certain price per share.  The investment has no obligation to reach the value people have in their heads.

Another manifestation of this, often to our detriment: we walk into a store, and the first thing we see is a very expensive item, say a piece of jewelry with a price of $20,000.  That number anchors in our heads.  A little later, while walking in the same store, we see another piece of jewelry for only $2,000 – seems cheap, doesn’t it?

Sample size immaturity is reaching conclusions from very small data samples.  Someone once told me that women are better drivers than men.  She knew this because she knew a woman whose husband had three traffic driving tickets and the woman herself had none.  If a stock price increases one day there’s no reason to expect it will increase the next.

Ownership bias is valuing something more highly because you own it.  Experiments related to this ask people how much they are willing to pay for something such as a mug.  People are then given the mug and asked the price that they’re willing to sell it.  Experiments using many people have shown that the mugs owned are “Valued” much more highly than those that are not, even though they are the same mug.