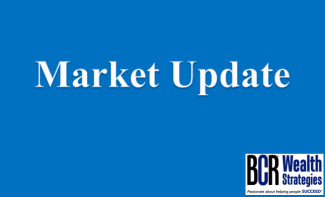 Breaking News- Should you buy or sell?

Should you buy or sell the dip?

You probably noticed that after a week of edging downward the market outright fell yesterday. To quantify it, the S&P 500 fell 2.98% yesterday and is down 5.83% over the past five days.

While it caused anxiety in many, in the bigger picture, this is a pretty modest drop for a market that was up 17% so far this year, and some analysts were surprised it wasn't worse, given the startling way the Trump Administration, seemingly out of nowhere, escalated the trade war with China by announcing a new round of tariffs.

The media and many investors are increasingly concerned that the President continuously asserts that tariffs are a tax on China instead of the American buyers of Chinese products.  For every action there are reactions.  Some you can anticipate but many you cannot.  We won’t know who is paying for these tariffs until we can look back historically.  Yes, buyers of goods will tend to pay a higher price if the exporting company maintains the same pricing policies that it had in effect before the tariffs were levied.  But many exporters will lower the price they demand in order to offset the effectively higher price in the U.S. market, eating some of the tariff's bite in order to remain competitive.

An alternative is that the foreign country might depreciate its currency, making its exports cheaper across the board and more than offsetting the impact of the tariff.  This explains why China decided to stop defending the value of its currency almost immediately after the tariff announcement, causing the yuan to fall below seven to the dollar.  The Trump administration seemed to be caught off-guard by the move, and immediately branded China as a currency manipulator--a charge that would be hard to prove since the drop was entirely due to the movement of currency markets.

So back to our opening question; is this an opportunity to buy stocks on sale or a sign that it will drop more.  Nobody can say for sure, but it seems unlikely that this drop signals the end of the bull market, given that the U.S. economy is still healthy and enjoying the effects of a recent Fed stimulus.  Second-quarter earnings on the S&P 500 (with 387 of the 500 companies reporting) stand at $42.13, which is comfortably ahead of the $40.70 forecast for the quarter.

There doesn't seem to be an apocalypse on the near horizon, though at any moment the long bull market could turn bearish for anywhere from a few quarters to a year or two.  With the short-term (both in terms of the next few weeks and next few years) unknown, we turn to the long-term plans and goals to determine the best trading decisions.

If you invest because you believe that individuals and companies will continue producing and growing worldwide wealth over the next 20-30 years, then yesterday’s “sale” was a great time to get in with available funds even if it goes down more in the near term.

History has shown that when stocks suddenly go on sale, due to a startling of the investment herd, it's an opportunity to buy, rather than a good time to sell.  The opportunity to succeed should be focused on your planning and whether you are positioned to weather the inevitable recession.  If you are, then the decision is really whether your plan calls for you to ride through the dip or buy through a rebalance.  Selling should only be considered if you have an immediate need with no other outlet to satisfy it.

Some of the information above came from Bob Veres Inside Information