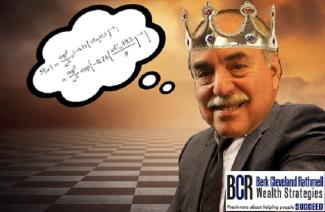 Do You Really Understand?

There’s an old story about a king who, while indebted to a sorcerer, is given the choice of paying cash in 30,000 talents of silver to the sorcerer, or paying the sorcerer one talent on day one, and doubling the payment each day.  This payment would continue for each square on a checkerboard (64 squares).

The king figures one talent on the first day, two the second, four the third, and so on.  This is obviously less than 30,000 talents.  So he opts for the checkerboard scenario.  In actuality, the total number of talents under the doubling scenario would cost him more silver than his total treasury (the total would be more than 18 quintillions – 18 followed by 18 digits).

Behavioral scientists tell us that we often act just like the king, not fully taking the time to look at the full picture.  Let me share a personal exposure I had to the risk of not looking at the whole picture.

A firm offered to sell me solar panels for my house.  The sales presentation was very well done.  It showed the initial cost (about $32,000) and the financial benefits that would accrue for having my own electric power generation:

When I made a spreadsheet, going out for 25 years, I discovered that the first few years really look great.  That $9,500 is a big shot in the old arm.  However, when I look at the actual cost and benefits, here’s what I found:

Starting in the third year, my annual cash flow is negative by between $1,500 and $1,800 and stays that way until the loan is paid off, at the end of ten years.  Furthermore, when I look at the accumulated financial benefits and costs, I actually don’t go cash flow positive until the sixteenth year; way too long to wait.

The point of this is to show that, unlike the king with his silver, I understood the real financial impact of my decision.  I am not suggesting that it doesn’t pay to get solar panels for your home.  I am suggesting that when making financial decisions, you need to understand the entirety of the situation, not just what the big print says.