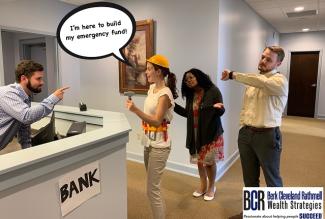 How to Build an Emergency Fund

Americans are not saving enough.  Despite low levels of unemployment and what looks to be one of the longest economic expansions in US history, many still lose sleep at night over a lack of emergency funding.  According to a 2018 survey done by bankrate.com, 23% of Americans have no emergency savings at all.

Many people neglect to start an emergency fund.  Whether it’s because they’re so busy, they don’t think about it, or because it seems like a daunting or impossible task, they just haven’t gotten around to it.  But when an emergency comes up, they sure wish they had made it a priority sooner.

An ample emergency fund is essential to a sound financial position, and it isn’t as complicated as you might think.  Most can develop a plan for saving in less than an hour.  If you’re ready to start now, here are four keys to building a solid emergency fund.

The general rule of thumb is six months’ living expenses.  Dual-income households may be fine with as little as three months’ living expenses, as long as you would have enough to survive if you lost the larger income and had to live on the smaller one.  Be sure to include enough to cover once-a-year bills (car tags, licenses, etc.) or any employer-paid expenses, like health insurance, that you would have to begin paying if you lost your job.

What qualifies as living expenses?

Anything that is necessary and non-negotiable is a living expense.  This includes things like groceries, housing, utilities, insurance, gasoline/transportation, and medications.  Things you would be willing to do without if you lost your job – like clothes and entertainment – are non-essential and do not count as living expenses.

What qualifies as an emergency?

Anything that happens unexpectedly and cannot be anticipated is an emergency:  a healthcare crisis, loss of income, or damage to your home, such as a broken air conditioner or a fallen tree.  Emergencies do not include things like Christmas gifts or vacations.  Anything you know will come up sooner or later is not an emergency.

2. Start small if you need to – just make it a top priority.

You can make it easier to save by checking with your employer to see if they offer the option to have a portion of your pay deposited directly into a separate account.  If not, then check with your bank to see if there is a way to schedule regular drafts that coincide with your pay periods.

Don’t keep your emergency fund in your regular checking account.  Keeping it with your spending money makes it too easy to spend on something that isn’t an emergency.  It’s best to keep it in something that is protected from losing value, like a savings or money market account.

If you have an emergency and take a withdrawal, replenish the fund as soon as possible.  You don’t want to get caught without reserves if another emergency comes along before you replace what you withdrew.