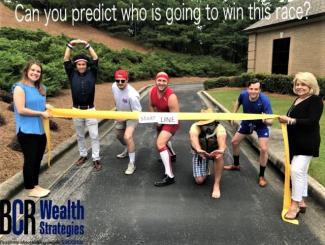 Is it possible to pick a mutual fund that will beat its peers next year?

Actively managed mutual funds are built on the hypothesis that their managers’ investing abilities are greater than everyone else’s investing abilities so that you can make more money than others that invest in a similar asset class.  They typically ask for higher compensation to pay for their talent’s abilities.  Human nature wants us to believe that we can pick which of these gurus is truly talented and which were lucky in the past so that we can make outsized returns in the future.

It is natural to feel this way because we see winners and losers in other areas throughout our lives.  Many times we know which sports team is going to win, a teacher can tell us which students will score high on a test and which politician is going to get elected.

While we compare these selections with picking the best investments, it is not the same situation.  The price of an investment is based on what market participants agree to buy and sell at.  With information readily available the market participants are able to come to an appropriate price.  The price changes as new information becomes available.  With so many people buying and selling, academics have shown many times over that selecting or not selecting a specific stock has similar odds to a coin flip.

So how does that work since some managers have outperformed the market?  Imagine that everybody on earth, all 7.5 billion of us, were to try to flip a coin and land on “heads” with every toss. We would be eliminated from the competition whenever the coin comes up “tails.”  The odds, of course, are 50% with each toss.  That means roughly 3.25 billion people would be eliminated on the first flip.  Another 1.625 billion would move to the sidelines on the second flip.  Eight hundred million would survive the third flip, 400 million (roughly) would still be alive on the fourth flip.  Then, with flips five, six, seven, eight, nine and ten, we would be left with 200 million, 100 million, 50 million, 25 million, 12.5 million and roughly 6 million.

Ten more flips take us down to 12,000 remaining participants, and ten more brings the number of contestants to 12.  The next flip might produce anywhere from 4-8 heads, but eventually, you would be down to one person who has somehow managed to flip a coin and had it land on “heads” somewhere between 23 and 25 times in a row.  Given all the media attention given to this exciting worldwide contest, you could expect the media to interview this person and breathlessly ask him or her for the secret skill that allowed him or her to achieve this remarkable feat.  What’s the secret to having a coin come up “heads” 25 times in a row?

If they asked them to flip one more time, would you consider it an investment to put a substantial amount of your net worth on this same person getting heads again?  Hopefully not, most of us would see it as having the same 50/50 odds that it had all along.  Many would even refer to it as gambling.

Bringing it back to the investment world:  With so many professional managers making predictions, someone has to get their claims right multiple times in a row.  If a manager has gotten the luck of landing on “heads” over and over again, are the investors who give them their capital and allow them substantial compensation for their claimed skill investing or gambling?

While academics argue you should focus on low-cost diversification and tilting the portfolio to the risk and potential return you desire, the debate isn’t settled.   As long as there are people that can make money selling active management and human nature drives us to want to believe it, you will find people touting the “skill” of managers.  As an investor, your job is to be wary of these claims and decide if you can pick out the difference between luck and skill.  If not, I suggest you stay away from the active gamble.

Some of the information above was provided by Bob Veres Inside Information.